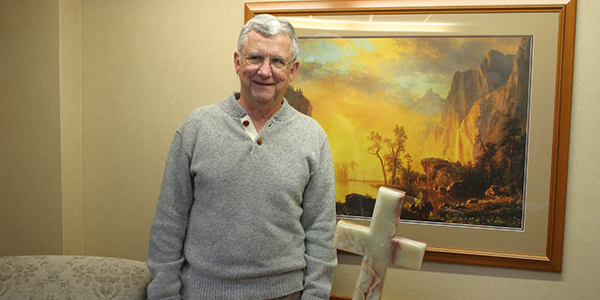 Stacey Henderson understood just how important it was to stay on top of medical advances. In fact, it was a medical advance from over 75 years ago that changed Stacey's life.

On a cold winter day in November of 1942 Stacey slipped as he ran across an icy street; he was hit by a car and his leg was run over. Rushed to Blank Children's Hospital, Stacey and his parents were told his leg had to be amputated below the knee because his injury was so severe. But a second opinion by Dr. Overton changed the course of his life. Dr. Overton had just learned about a new procedure-the traction split-that could save Stacey's leg.

Early in 2017 Stacey passed away, 75 years after his leg was saved and his life forever changed. As part of his legacy planning, Stacey chose to leave a specific amount from his IRA to Blank Children's by beneficiary designation.

Stacey shared about his gift, "I was doing my estate planning and Blank Children's Hospital was at the top of my list." And, being a financial advisor Stacey knew that giving part of his IRA meant Blank Children's received the full value of his gift, where his heirs would have had to pay income tax on all of the funds inherited from his IRA.

Forever grateful for his experiences at Blank Children's Hospital, Stacey said "I hope my bequest perpetuates the hospital's excellent care." During his life Stacey also said, "My gift will be focused in the area of training doctors and staff to learn about the latest procedures and advancements." Those advancements changed Stacey's life for 75 years and he wanted to give back and hopefully make a similar difference in for children today